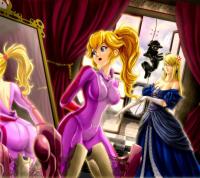 Super "Smash" Bros. Free For All

World of Dark (The "EVERYONE" Roleplay)