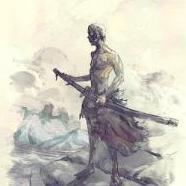 As the bowels of this tomb would once again roar with action Gin would move faster, he needed to stop whatever was going on down there. More spiders would begin to accost him as he ran. In hard punchi

Nephviri was caught off guard when she heard the arrow fly through the air. Where did that come from?! Her eyes being the only thing able to move she looked to the side and saw a silhouette of a man a

Gin turned his head to look at the infernal woman who had began to speak to him. His brow furrowed as he listened to her. "You want me to cut you down? Why so I can fight you both" he scoffed at turni