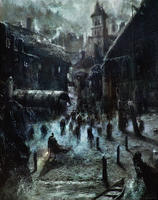 [RP] the Town of Alder

the town of Alder, a murky forgotten town at the edge of civilization. While great hunts are in effect in major cites across the continent something is stirring in the Alder. talk of a great ones deep within the sea close to the town and of the occurring insanity and sickness amongst the population. what they don't say is the stirring of beasts and chosen, beings chosen to ascend to godhood, become a great one albeit in still in human form. there is talk of worship of dark gods, some hunters come into the town to hunt , others to escape being hunted by their brethren. Something forbidden is in the middle of all this. the ravings of Mad Jacob seem to be the only information most hunters can get,if his mad ravings bear any truth, talk of fish monsters rising from the sea, strange noises at night from the dilapidated buildings. and talk of a forbidden truth deep within the town. not all is at what i seems, beasts stir but not enough to be a plague, the locals are odd with sickly skin and black eyes with folds on their face.

7) when i say great ones im trying to be similar to lovecraftian horror, btw no expert on it i do have abook filled with stories written by him also some characters will go insane

9) currently debating this but until i change my mind, perma death unless resurrected by a great one. general rps do not count, also discuss this first any deaht that just happens is against this rule deaths must be agreed upon by both parties

10) going insane is different if your character is exposed their sanity will go down depending on your characters actions, for example activiley looking for great ones or any monster will eventually wear out your sanity. with the exception of general rp which is basically just characters wandering around a vice versa with death in general rps your ocs will still be alive and sane depending on their sanity on their creation. in other words even if you lose your sanity or die in a story rp you can still be them within general

Backstory: why are they there? How did they become whatever they are?