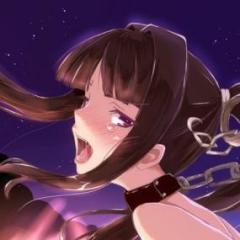 Cad squeals as Chara spanks her ass. Crawling forward onto all fours she arches her back, presenting her pert little butt to him. Her face is flush. She chews her lip as she rocks her hips back.

"mmm I'm glad it makes you feel as good as we do." Rubs dreams thigh, petting it while running his other set of fingers through Leona's s hair his cock drawing back and easing into Leona letting dream